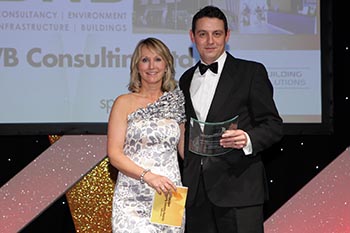 BWB Consulting were voted Consultancy Firm of the Year at last week's Yorkshire Property Industry Awards, which were attended by more than 350 of the region's top professionals.

The judging panel’s comment that BWB “… are right at the top of their game”, is evident by their involvement in some of Yorkshire’s most impressive developments. Over the past year, BWB has been involved with some major projects in the Yorkshire region including York Sports Village at the University of York; Travelodge, Hull and Trinity Walk, Wakefield.

This year has also seen BWB successfully venture into the Australian market, exporting their engineering excellence to a new client base. So far, BWB have been instructed on major Australian commissions with Ikea and Urban Est.

Managing Director, Steve Wooler said, “We are delighted to have won this coveted award which is made even more significant as it coincides with BWB celebrating the 10 year anniversary of our Leeds office. The past 10 years has seen BWB’s presence in the Yorkshire region go from strength to strength and is supported by a fantastic and committed team of professionals regionally and now internationally. The pride and prestige associated with winning awards like this should be a powerful stimulus to us all, and it certainly bodes well for our future success.”