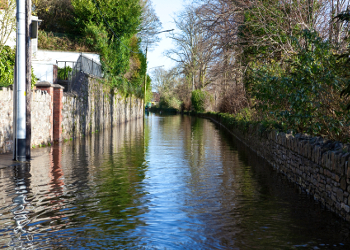 At BWB, we have been monitoring some of our own flood mitigation schemes and how they have faired during the recent extreme weather conditions. Throughout the challenging weather conditions, our various flood mitigation schemes appear to have functioned as designed without exacerbating flooding. This demonstrates the innovative and positive approach we have to flood risk assessment work and the extent of any mitigation works necessary to offset the potential impact of a development on the wider environment.

Nevertheless, as an industry it is important to learn from these types of events and keep abreast of the potential effects on property and development sectors. We have liaised with our contacts within the various authorities across the country to gauge the reaction to the recent events and gain anecdotal feedback on the flooding experienced within their respective areas to inform our assessment work in the future, which highlighted some key issues to be aware of.

Climatologists are researching the recent phenomena within their various climate models to gain a better understanding as to whether the variations could be a symptom of climate change. In addition, the DEFRA UK Climate Change Risk Assessment (published January 2012) identifies flooding as the risk most likely to significantly increase in the next few years compared with other climate change indicators. This type of research may affect the climate change estimates currently used to assess future development. General feedback from our contacts within the Environment Agency is that we should be assessing development against more extreme events to ensure flood mitigation proposals are sufficiently robust.

Under recent legislative changes, the responsibilities for flood management have cascaded down from the Environment Agency to Lead Local Flood Authorities (with respect to ordinary watercourses) and in turn, the system encourages responsibilities to be delegated further down to community action groups. There are examples now of these action groups gaining grant aid funding contributions to implement their own flood management schemes. In addition, DEFRA funding for major flood management schemes is also subject to third party contributions. The radical changes to the administrative structure of the way flooding is managed in England and Wales paves the way to a more partnership led approach which now allows developers to contribute to wider flooding improvements, possibly via a S106 mechanism. Hopefully through targeted community engagement, development will be regarded as being part of the solution to existing flooding problems as opposed to often being regarded as the cause of the problem.

The burden on the emergency services during the recent events was evident with thousands of flood related calls and the need to evacuate vulnerable locations. With a tragic fatality in Shropshire highlighting the likely confusion which exists when seeking a safe access route and stories surrounding the evacuation of care homes in South Yorkshire with inadequate egress provisions, assessing emergency access and egress should be a key consideration for all development. This issue when not covered sufficiently within Floor Risk Assessments is regularly a significant point of objection. This is likely to be further reinforced in the future.

The insurance industry has been hit by significant flooding claims over the last five years. In June 2013 the ABI (Association of British Insurers) is set to withdraw its current agreement with the Government, known as a “Statement of Principles”, which gives an obligation for providing flooding insurance. This places some doubt as to whether there will be flood insurance available to property in high risk areas, affecting property prices and financing of commercial uses. We understand that negotiations are underway between the ABI and the Government to replace the Statement of Principles. However, until this is in place, development proposals in high risk areas should consider not only undertaking a Flood Risk Assessment for planning purposes, but also post planning providing insurers with the evidence base to confirm the robustness of the flood mitigation proposed to give them the necessary reassurance regarding the level of risk associated with a premium and in turn reassure the potential occupiers that the property is insurable.