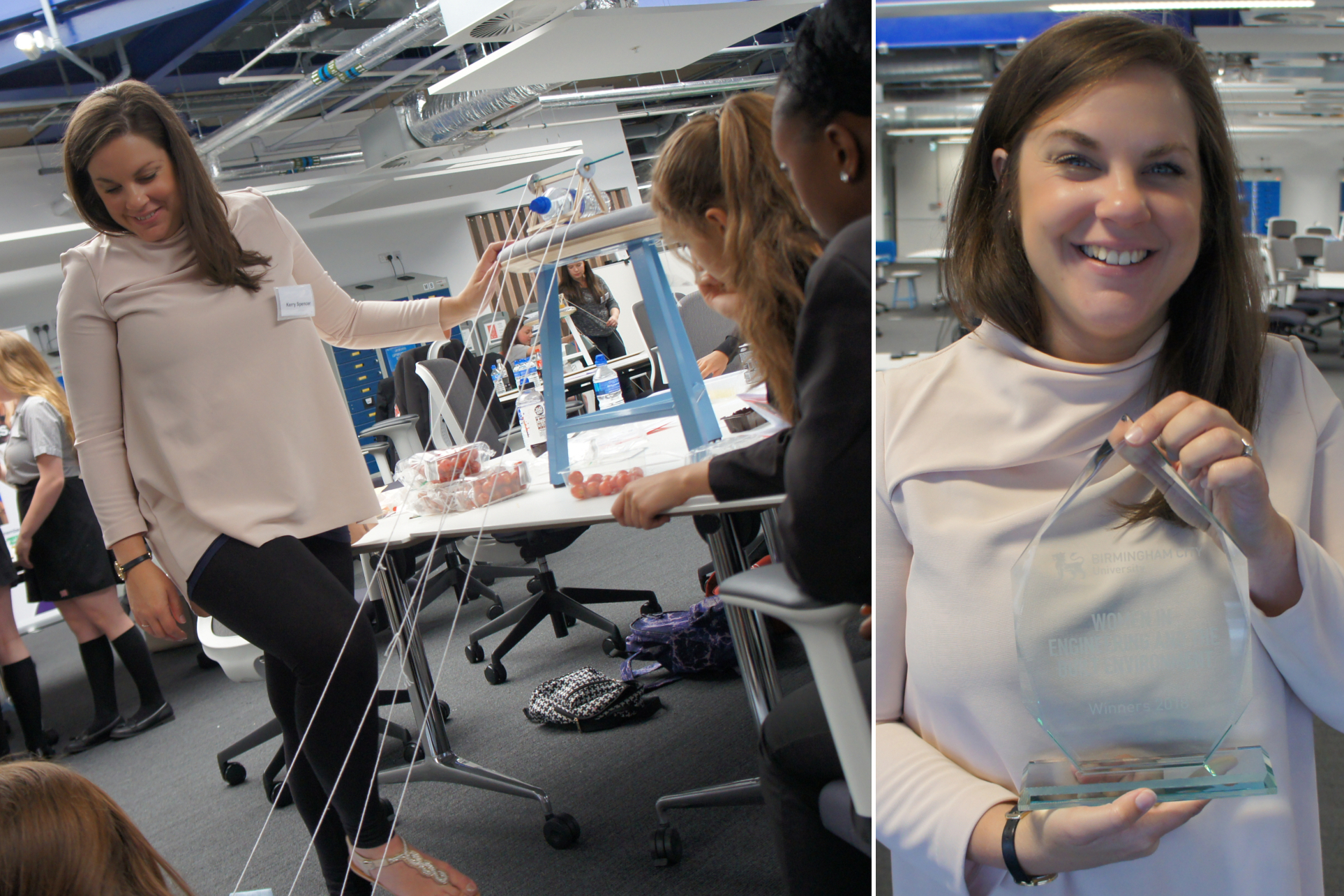 A BWB engineer has mentored the winning team at a STEM challenge event for schoolgirls at Birmingham City University. Structural engineer Kerry Spencer led the pupils from Erdington Academy to victory at the university’s annual “Women in Engineering and the Built Environment Day” last week.

Sixty Year 8 students from four Birmingham schools were split into 13 teams to take on the “Squashed Tomato Challenge”. The aim was to design and build a model within 2 hours that could safely transport a high volume of cherry tomatoes from a stool balanced on a table-top down to the floor. Inspiration for the challenge came from the real-life scenario of farmers in Nepal moving fruit and vegetables grown on the mountainside down to the market.

Each team was allocated a female industry mentor to encourage and guide them, discuss their ideas and assist with the model’s construction. BWB was represented by Kerry, Heather Griffiths, Laura Westoby, Catherine Thorpe and Rebekah Duncan while other mentors came from big names including Jaguar Land Rover, Arup and Cundall.

When the 2-hour build time was up, each team delivered a presentation about their model and it was tested to see how many tomatoes it could carry to the ground in 2 minutes. After much deliberation the judges announced that the team mentored by Kerry was the overall winner with their “Tomato Travel Express” design. The idea behind the design was to create a system which was like ski lifts, using triangular trusses and weights top and bottom and the completed model had moved 81 tomatoes down to the ground. As the trophy was presented, the judges praised the girls not just for the effective design but also for their excellent teamwork.

Kerry said: “‘The girls I worked with were truly inspirational. They discussed their ideas in length before proceeding which included thinking about similar structures, how it would be built, how they would get the materials to site and how much it would cost - thoughts which exceeded their ages of 12 and 13. They didn’t deliver the most tomatoes down the mountain but their overall design and teamwork was incredible. It was brilliant to see these young girls being so enthusiastic towards the project and engineering overall. I really hope that they were inspired by the day and will look at different careers within engineers as they will be amazing assets to the future generation.”

BCU’s "Women in Engineering and the Built Environment Day" is held each year to showcase the range of career opportunities for girls in engineering. A practical challenge for the students is always the highlight of the day and it is the second consecutive year a BWB mentor has led the winning team.

Laura Leyland, a Senior Lecturer at Birmingham City University who organised the event, thanked the mentors for their input. She said: “Thank you so much for your huge contribution to the event last week. What a day! I was particularly thrilled with the way in which every team properly got stuck in to solving the problem this year. The work with the girls has truly lit some sparks, and the teachers have a greater understanding of the opportunities available to those in Engineering and the Built Environment.”