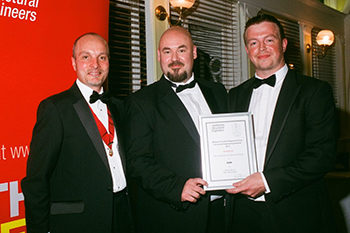 Success for BWB at IStructE Awards

Following national success at the ACE’s Centenary Engineering Excellence Awards 2013, BWB have again reaped the benefits of being ‘ahead of the curve’ with Building Information Modelling, this time by scooping a brace of awards at the recent Midlands Region Institution of Structural Engineers’ Awards ceremony in Birmingham.

Our team of Mark Jones, Ben Lancaster, James Garment, Sean Byron and Richard Day picked up the Winner Award in the Arts and Entertainment Structure category, for our work at Resorts World at the NEC, and a Commendation in the Sports and Leisure Structure category for Edgbaston Priory Redevelopment.

The £150m Resorts World development, which involves construction of a seven story 50,000 sq m integrated leisure and entertainment complex, presented a significant engineering design challenge for our team. Using REVIT design software our structural engineers “built” a virtual model of the development that enabled early detection of potential construction problems such as clashes between the structural frame and building fabric and the building’s services equipment and ductwork. The model also contains valuable intelligence such as material specifications and information that can be used as a facilities management tool for the completed development.

Peter Brooks, President and Chief Operating Officer of Genting Casinos UK was delighted with the award, stating “Resorts World Birmingham is by far our most ambitious project to date – with a budget and scale to match.”

Redevelopment of the famous Edgbaston Priory Club, home of the Aegon Classic Championships, includes a state-of-the-art sunken centre court with 1000 permanent seats, extendable to 2500 seats during major competitions. In addition to centre court a new six-court tennis centre of excellence will be built, creating a year-round facility for both professional and amateur players.